I've started to build a Ronzatori Intonarumori. To help I can use the 'single extant photograph of the internal mechanism of any of the intonarumori -' Lucino Chessa¹.

However this photograph does need some interpretation. 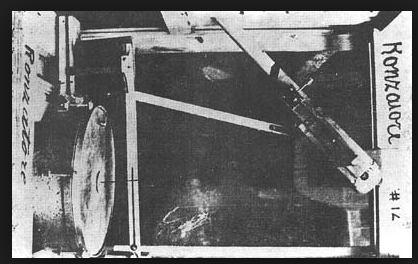 Once we are told that there is the hammer mechanism from an electric buzzer against the drum skin and the main resonating string is tightened by means of the lever, it is easy to understand how the Ronzatori works, however there are other things happening in here which are less easy to interpret.

Russolo may give some clues in a letter.

The Buzzers [ronzatori] possess a timbre that is similar to the humming of
electric motors; they are sweet and harmonious, very rich in harmonic sounds and are adapted with a pedal. Another timbre exists in the same instrument – that of the gurglers [gorgogliatori]. One can switch at will between the buzzer and the gurgler, which has the exact timbre of the gurgling of water in gutters. By means of two electric buttons one can, for example, hold a note of the buzzer and provide rhythm with the gurgler (that is to say, with the same note they can be sounded either together or separately, but when they are together the two timbres have the same note). There are three of these, but two have the same range, for which reason I would advise you to only use I – that is to say, the high. You can use it without fear, because both timbres are pleasingly sweet. You can also achieve staccato effects with these (unlike the howlers). They are also very well suited for legato. They lend themselves less well to singing, possessing a richly harmonic timbre that renders the note less certain. But they are full of charm and mystery.

So there is a switch 'between the buzzer and the gurgler' or both can be used together.

Here's what I think might be happening in this photograph.

I think the photograph was taken without the far side of the box on and using a flash hence the black area. The photograph may also have been taken during the construction of the Ronzatori showing the the structural supports E and F being positioned.

So the main mystery here is that of the 'Gurgler'. I imagine it to be a weighted metal rod which may be textured to some how hit the main string. This may be pulled up and down by either a rotating cam or a similar hammer lever of a buzzer mechanism. Anyhow these questions may be answered by trying to recreate the Ronzatori.

Here's the start I've  made. 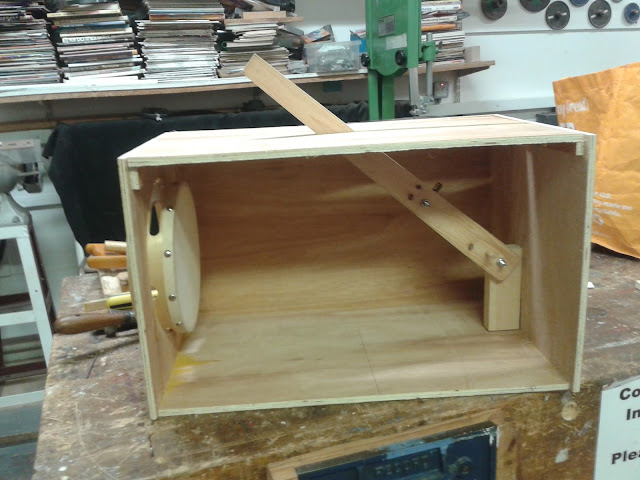 Posted by Martyn Simpson at 09:40 No comments:

There would seem to be two patents Russolo took out which are accessible on the web. The instrument de Musique looks to be very straight forward to make from the text and plans.
Here's the first stage of the instrument I have built. The sound holes on the resonant box are my embellishment. 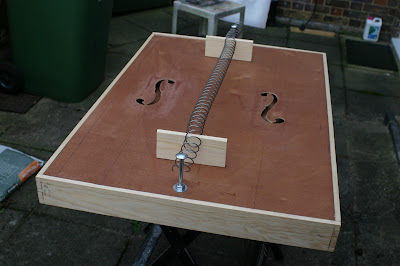 In the patent Russolo talks about the purpose of the invention.
'... is to create a musical instrument allowing the use of those longitudinal vibrations that are produced by the length ways application of a surface to a musical string. Notably, each musical string is made of a metallic thread wound into a spiral and tightened between two specific points above an appropriate resonant box. The aforementioned string is able to be struck, either by hand or stroked mechanically and tangentially by means of a loop and as seen in the diagram of the loop'.
So the next stage for me will be to build the conveyor belt. I do wonder if this instrument was ever built as the spring can't be tensioned as Russolo describes and I'm not sure if the suggested conveyor belt mechanism will create any desired sounds but I will try. At this stage I'm also unsure of what material to use for the belt. I'm quite intrigue by the Russolo's description of the instrument 'being softly and continually struck: for example, with a hand gloved in cellophane'. This may be a clue. 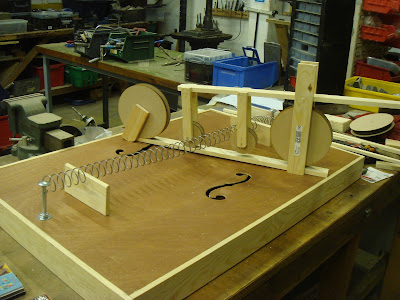 The conveyor belt is an interesting mechanism. Again I wonder if it was used in any of the big floor standing intonarumori where the lever is pushed down?

Hmmm...... having motorized the belt I now wonder if the sounds it produces were worth the effort, making me further question whether the instrument was ever made.


As you can hear the electric motor drowns out any sound the spring might make. Putting a contact piezo on the spring might help here. Getting the conveyor belt to run properly was a test of my mechanical design capabilities. Here's a photo of the belt tensioning pulley I had to add. 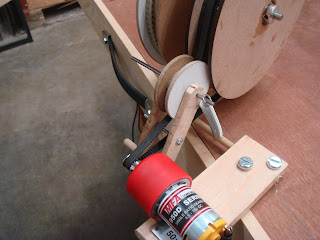 Mind you it's pretty industrial looking and sounding. I'm going to try a different spring and conveyor belt material.